In a galaxy far, far away… Hold on. Wrong movie. Or is it?

I’ve been waiting for Jupiter Ascending a long time. The release date kept getting pushed and when it finally settled on February (in the UK at least), I pounced on it. But the movie left me feeling a number of things, and “wow that was amazing” wasn’t one of them.

Jupiter Jones (Mila Kunis) is born on a ship carrying illegal immigrants from Russia to the States. Growing up with her mother and aunt, she leads a busy but boring life as a cleaner (really? She’s that good looking and couldn’t get a job in a bar?). Short on cash to buy a telescope (the passion for stars inherited from her murdered father), she agrees to her cousin’s stupid plan and goes to get her eggs harvested. But things don’t go according to plan and Jupiter almost finds herself being killed by aliens. 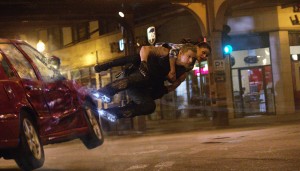 Rescued by Caine Wise (Channing Tatum), a part-wolf genetically engineered former soldier, she soon realises that her life is worth a lot more than she thought it was. The two escape hired assassins and seek refuge at the house of Caine’s former boss, part-bee soldier Stinger (Sean Bean-spoiler alert, he doesn’t die in this movie). Stinger soon realises that Jupiter is a royal, and that Caine’s simple rescue mission is anything but. Once again under attack, Jupiter is this time kidnapped and taken to Kalique Abrasax (Tuppence Middleton).

Kalique starts filling in the blanks: Jupiter is a reincarnation of the Abrasax’s mother. The Abrasax children, like many other families across the universe, own certain planets and harvest those for (spoiler). Strangely though, the deceased mother willed herself the planet Earth. Right now, Earth is part of Balem Abrasax’s (Eddie Redmayne) inheritance, but if Jupiter steps up, she can claim it for herself. Which is, of course, what Balem wanted to avoid by having her killed.

It becomes more complicated after that, but I can’t really give more away if you want to go see it.

The entire time, I kept thinking that Jupiter Ascending was desperately trying to become the next big sci-fi saga. But I don’t think it could. First of all, if it wanted to do that, it should have left us wanting more. And while lots of things are still left unexplained, I’m not sure that would have worked as there seemed to be very little plot. 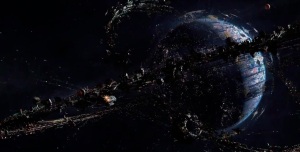 Secondly, while visually stunning (the CGI is breathtaking, and everything looks flawless), it reminded me too much of Star Wars I, II and III. Mila Kunis is essentially Padmé Amidala (same crazy/beautiful outfits, same will to do good and fight), Balem Abrasax could be seen as the Emperor and Caine as a Han Solo figure; funky engineered humans or robotic or alien creatures populate the galaxy and the planets all look a bit like Coruscant, Naboo and Mustafar.

The movie tries to take humorous elements seen in more modern sci-fi movies like the new Star Trek films, Guardians of the Galaxy and even Hitchhiker’s Guide to the Galaxy (think really complicated paperwork…) but never quite nails it.

Battle scenes are beautifully crafted, but really drawn out. The first one in Chicago almost sent me to sleep, and the other ones well… Who hasn’t had their fair share of intergalactic battle scenes? It’s all the same. The acting was good, there’s chemistry between Tatum and Kunis, an ambiguous Bean and a weirdly evil and creepy Redmayne, but it still lacked… SOMETHING.

Special mention to cool inventions like Caine’s hoverboots (forget the Hoverboard, so 1985), portable and retractable shields, openings and portals that can be created everywhere, as well as practical space survival suits in small cans, with about 40mins worth of oxygen. 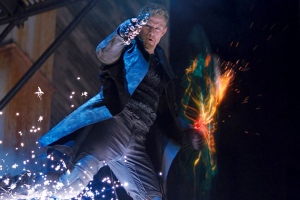 All in all something you can watch, but shouldn’t bet too much on. Which is a shame really.