I recently discovered Mozzarella sticks (yes, I know, I’ve been missing out) and when I had some leftover mozzarella from my Mediterranenan Chicken, and I was about to eat gnocchi with pesto sauce (store bought, I’m not at THAT stage yet- lol) I decided to try them out myself!

I found a couple of recipes online and decided to mix up their advice, which worked out great!

First, cut the mozzarella in thick slices. I had one thin slice and that one just melted all over the place. Thin slice=bad, thick slice=good. Then I mixed together the eggs and prepared a plate of flour and one of breadcrumbs. I used Paxo golden crumbs, but just because they were cheaper.

Take each slice and a) roll it first in the flour, then b) dunk it in the egg, and c) roll it in the breadcrumbs then repeat steps b) and c). The flour BEFORE the egg makes the mozzarella less sticky, therefore egg and crumbs stick better. Doing it twice just guarantees an even coating.

As suggested in one of the recipes, I then put the squares in the fridge. If you’re not in a hurry and you have the space, you can also put them in the freezer for 10min. 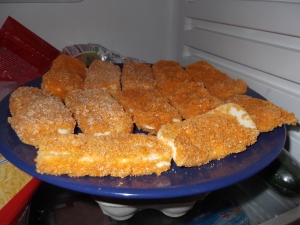 After removing them from the fridge, I drowned my nicest frying pan in Olive Oil and let it heat up. When it’s hot, put in NO MORE than 4 squares at a time. They’re very quick to cook and if you overcrowd them it’ll get messy. Turn them once after 30 sec, then leave them a further 30 sec and then take them out before the cheese escapes its confines. 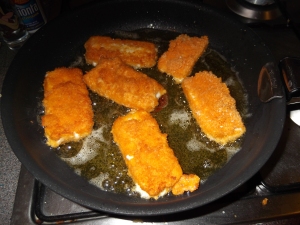 Have a plate with kitchen towel ready to soak up the oil. I layered two pieces at the bottom, put down the first four and then layered like that until they were all out and covered head to toe in paper. Then I laid them out on the plate. 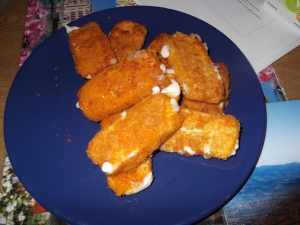 Thet tasted really nice! The thicker the better as I said before, and maybe next time I will try seasoning the breadcrumbs, but it’s not a necessity. I had some left and froze them. Reheating in the microwave is bad, but if you have a George Foreman grill, or maybe even in the oven, 5min should do.