Ever since I was a little girl, I’ve been surrounded by music. To be fair, it was already there before I even left the womb, as both my parents are pretty keen on good tunes. I was given a bright red Sony Walkman when I was about four, and I carried it around EVERYWHERE. What I listened to most was Disney tapes or other kids’ stories (Twins at St. Claire’s, Neverending Story etc.), but eventually music took over.

My mother always tells a story of me, in a French supermarket, singing The Supremes’ “Baby Love” at the top of my voice. I did not speak English at that time, by the way.

My parents always played tapes in the car when we drove somewhere, as well as listened to the radio. So I remember my childhood with a steady stream of Beatles, Phil Collins, Gilbert O’Sullivan and random Salsa music interspersed with the best of the 90s. No wonder my taste in music is so varied!

I think people can be divided into two groups: those who refuse to listen to the same music as their parents, and those who do, and beg for more. I don’t like everything they listen to, but I enjoy quite a lot of it. And as corny as that sounds, the older I get the more I enjoy stuff that was made before 2000. Or even before 1990.

I used to be (and still can be when needed) the queen of the mix tape (or mix CD). I did them all the time, with the oddest combinations possible. The best ones (very good for driving they are) hold a combination of old school tunes, Disney classics, current artists and a selective outsider.

That doesn’t mean, however, that I dislike what’s on the radio nowadays. I wouldn’t listen to Kiss or Radio 1, but when I do find a song I like, I’ll check out the artist. And as I’ve noticed, a lot of great music at the moment is on soundtracks. Be it TV shows or movies, when you listen to what goes on in the background you’ll actually find a lot to enjoy. Without Reign, I would have never been introduced to London Grammar, Bastille or Woodkid.

Country Strong, True Blood and Hart Of Dixie got me into country music (I love Josh Turner) and some of the best melodies are original scores for movies (think Hans Zimmer, Danny Elfman, John Williams, Alan Menken etc.). Music is everywhere if you just listen (oh look at me paraphrasing August Rush) and I couldn’t imagine living without it.

I always have my MP3 player with me (the one time I forgot it at home I felt like horrible) and blame it on a steady stream of Glee and other musicals, I always need a soundtrack to my life. My head is bursting with songs at all times of the days, and they range from random to even more random.

Sometimes I’ll just pick up on a word you said and start singing (“Let It Go”, anyone?), or out of the blue I’ll just start on a song that was flying around in my head and you won’t know what hit you. I’m quite glad to have found friends who are the same, and last weekend saw us drive on the M25 with music blasting and 5 of us singing at the top of our voices, followed by an exhausting session of dancing and singing at the party.

If I could, I’d have music on everywhere, all the time. I love it when there’s (good) buskers in town or on the Tube. I adore it when a station decides to play music through their PA system. Before the December holidays I persistently played Christmas songs to the children at school. If I could afford it, I’d go to see all my favourite artists live all the time (I’ve seen Coldplay 3 times). 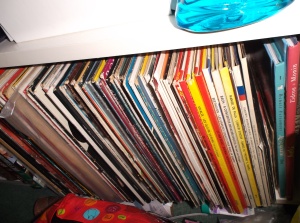 And while I know that I generally don’t have a specific type of man, musicians are my Achilles heel. I even (almost) don’t care what instrument it is they play.

So next time you feel blue, just put on your favourite song. And it shouldn’t matter whether it’s currently “in” or not. All that matters is that it makes you happy (clap clap).