This review comes with a massive delay since the film isn’t in cinemas anymore, but I hope you’ll be intrigued enough to maybe get the movie on DVD when the time comes.

If you enjoyed Hugh Grant in everything, especially Music And Lyrics, and if you remember Marisa Tomei from Only You and Crazy Stupid Love, then this movie will definitely be one you should watch.

Keith Michaels (Hugh Grant) is an Oscar-winning screenwriter. Unfortunately, he hasn’t done anything good since and while his one-time hit is still everyone’s favourite movie, he can’t quite catch a break in Hollywood anymore. In despair, he accepts his agent’s offer of a teaching job at a small college on the East Coast.

Used to an easy life, Michaels decides to do as little as possible for his class and starts choosing students not based on their writing skills, but rather on the depth of their cleavage (for girls) and their all-round dorkyness (for boys).

Unfortunately for him, the college is well-equipped with well-meaning and law-abiding teachers, and his colleague and Jane Austen aficionado Mary Weldon (Allison Janney) is all out to make sure he either does as he’s told or leaves. 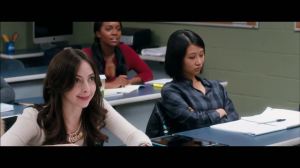 When Keith unexpectedly befriends mature student Holly Carpenter (Marisa Tomei), he starts to realise that there might be more to life than money and young women, and he finds himself invested in his students’ lives and stories, while simultaneously rediscovering himself.

I found this movie surprisingly refreshing, because it wasn’t just another romantic comedy. Much like Music and Lyrics, it questioned whether fame and fortune means you have it all, and how people satisfied with very little can be happier than those we deem luckiest.

It also focuses on the often vicarious relationships between older men and younger women and shows mature women under a better light, highlighting their “perfection” rather than their flaws.

Hugh Grant is his charming yet awkward and annoying self, while Marisa Tomei offers much wisdom in the form of witty one-liners.