This year is seeing an extraordinary amount of books turned into movies. I’d read about this growing phenomenon before, but it seems 2014 is driving the point home: there are no more (or very little) original ideas left. Ergo a growing number of reboots, sequels and prequels and yes, books turned into movies. (Then again, hello, someone who wrote the book had an original idea, why don’t you ask them to write your scenarios for you???)

Anyway, back to our topic. The Monuments Men is based on the eponymous autobiographical book Monuments Men: Allied Heroes, Nazi Thieves and the Greatest Treasure Hunt in History by Robert M. Edsel. Robert is one of the original Monuments Men and has written more than one account of their lives work. 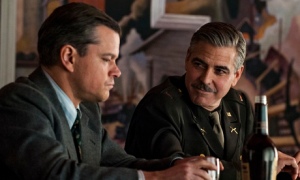 The story as seen in the George Clooney movie goes like this: 1943 signals the approaching end of Word War II. Frank Stokes, art expert, convinces President Roosevelt that the increased bombing and looting might signify the end of all Western Art, leaving nothing of the world’s treasures for following generations to enjoy and learn from. Tasked to protect art from being destroyed, Stokes is creating the Monuments Men, a small platoon of artists, museum curators and architects in order to save as much as they can.

Meanwhile in Paris, Claire Simone (Cate Blanchett) is forced to work alongside her Nazi supervisors to ship art to Germany for Hitler’s future Führer Museum, as well as the private collections of senior commanders. When her boss Victor Stahl leaves unexpectedly as Paris is about to be liberated, Claire swears revenge.

While Granger is sent to Paris in order to get information from Claire, who has been locked away for apparently being a collaborator, the others split up between Belgium, Italy and Germany to protect art from being stolen, as well as tracking down shipments in order to return them to their rightful owners.

The movie is well-made, and if you’re into history and art, there’s enough there to keep you happy. The movie also touches on the horrors of the Holocaust, with Granger finding an entire warehouse filled with Jewish furniture and clothing stolen from their houses after they’d been sent away, as well as the other Monuments Men finding gold fillings taken from Jews’ teeth once inside the Camps. 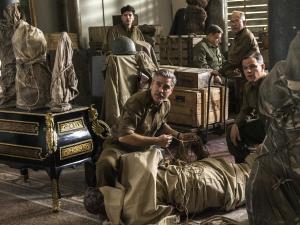 The only thing that annoyed me, but that’s because as a multilingual I get really naggy with stuff like that, is that for once they managed to find Germans to play the Nazis, a Frenchman to play a Frenchman and so on, except for the role of Claire, played by Cate Blanchett. And as much as she tries to sound French, she just… doesn’t. How hard could it have been to ask Kristin Scott Thomas or Jodie Foster, both of them perfectly fluent in French? There’s also the more minor character of Sam Epstein (Dimitri Leonidas) who plays a German Jew who managed to flee to the US. His German is so bad, my friend and I looked close to throwing up. Albeit not as bad as Matt Damon’s French, which even makes English speakers gasp it’s that atrocious.

All in all, a great movie to watch this winter.