Have you ever really liked a band? Not just, you know, mooned over the lead singer/guitarist etc. while listening to their entire album collection? Or gone to every concert sitting at the back or squashed in the pit, singing along to every song? I have. But, there’s always this little nagging voice. The fact that as much as you know things about the band, their music, their birthdays, the name of their second wife, you don’t actually KNOW the band. Unless you’re said second wife. 😉

Which is why I like supporting my friends’ bands so much. You know them, you’ve probably been there when the band was born, or you might have heard that new song before anyone else because they were playing it at your party. And it’s just so much better. You get first dibs on the gigs, the tunes, the T-shirts. You know what’s wrong, what’s right, what’s missing and what’s happening. 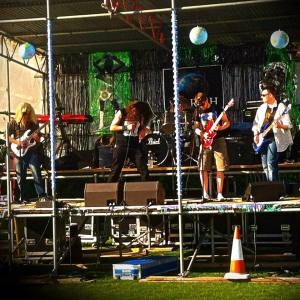 At the moment, I just have a massive thing for Überkill. Don’t know them? Well you bloody should. I got into them because, yeah you guessed it, I know one of the guitarists. After a while he invited me and some friends to one of his gigs, a rather obscure venue in Camden where noise was much louder than the actual music. It didn’t matter though. Out of all the bands that night, they were the best.

Can’t really pinpoint one particular thing, although I’ll say this: if you want people to like your music, play it for them as well as for yourself. And that’s what they did. You could feel every note from the guitar solo in every fibre of your body, the singer’s electrifying presence was enough to keep you staring at him mouth hanging wide open, and if that wasn’t enough, most of the songs are actually pretty catchy.

So there I was, suddenly realising what I’d just become after a 20min set: an Überkill groupie. The kind that listens to the songs on repeat and likes every picture/video/gig just so it’ll show up in their Facebook feed and attract other people. The kind that posts about every gig in the hope someone will come along (I have managed to convert a few people successfully). 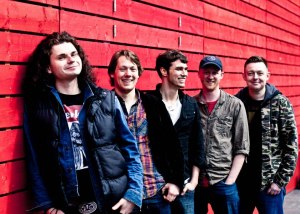 I can’t really keep going on for much longer without any of you thinking I’m a completely obsessive fan, or possibly “the band must’ve put her up to it for publicity reasons” (they haven’t) so I’ll just let you make you up your own mind by leaving you with this video (they have a Youtube channel) and the links to their website and Facebook page.

P.S. If any of you are also looking to learn the guitar, guess what, my mate gives lessons. Here’s that last little link to Nick Childs Guitar Tuition

One thought on “Gotta Keep It Up”