Do you like thrills? Do you like rides and roller coasters? Yeah me too. Well, I don’t do loops. Or drops. Unless they’re in the dark and even then I might want to kill the well-meaning friend that dragged me on there.

But this year it seems that I’ve been getting my fill of thrills: we went to Disneyland in late September, I went on my first flight in early May (whoever tries to tell me that’s not a thrill go fly a kite) and last week I went to Thorpe Park and Chessington World of Adventures.

Now I don’t go on all the terrible rides, like Swarm or Nemesis Inferno or Rameses Revenge or the Indiana Jones ride. I could have done Space Mountain or the Aerosmith one but I was too afraid. Next time, promise.

Now I LOVE Disneyland. Not necessarily because of the characters or because of the movies, but because it’s got great rides and a beautiful atmosphere. Big Thunder Mountain is my favourite, and I loved Crush’s coaster as well (albeit it was very short). Star Tours is great and Buzz Lightyear’s Laser thingy too. 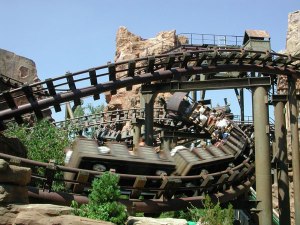 I also love Phantasialand (near Cologne) because that’s got a really amazing atmosphere, the decorations are awesome and their rides are amazing. I love Winja’s Fear and Force, Colorado Adventure is my favourite (I have a thing for Wild West Train-type rides). River Quest is good fun in the summer and it’s good value for money.

Thorpe Park I’m always disappointed with. The focus is on the rides and it looks rubbish. You can tell things are falling apart (Storm Surge is squeaking and water is seeping through everywhere) and the one ride I used to love there, X-only way out, has been renamed X and instead of being backwards it’s now forwards. So it’s nice, in the dark, flashing lights… But you know. Meh. 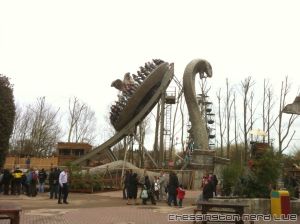 Chessington is my favourite here in the UK. I haven’t been to Alton Towers yet, but it appears to be like Thorpe Park, and the only ride I’m interested in is Air. Anyway back to the World of Adventures… I can do everything. Except for Rameses Revenge as I said. Especially if it gets stuck like it did that day… But I LOVE Vampire and Rattlesnake and Cobra (I get slightly dizzy but it’s fun) and Dragon’s Fury is ok. I mainly had my eyes closed and was holding on for dear life.

All in all, I love that feeling you get when it goes up and then you drop or you’re projected really fast. On Vampire and all the train type rides I’m always in the back row to get maximum momentum. And I don’t need loops to think a ride is worth it, but I do appreciate an effort in the park decoration. When they have great “lands” or “areas” it’s much better.