Well yes, my title is a bold statement. Then again, the Tudor dynasty is one that has remained on everyone’s mind for a long time through stories, novels, movies, TV shows and a constant stream of Tudor events happening at the historic royal palaces. Of course, there weren’t that many Tudors, but they have had great influence on England’s future, especially horrible Henry VIII and his six wives (divorced, beheaded, died; divorced, beheaded, survived).

Why is it that we’re all completely transfixed by Henry, Mary and Elizabeth? Well, probably because in a world where we constantly want the next big media story, the super scandal to follow via Twitter and in trashy papers (think Pete and Jordan, urgh, how long will this go on for!!!) the Tudors were IT. 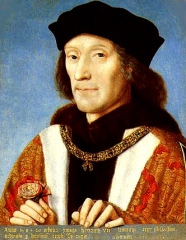 I mean, think about it: first comes Henry VII, hidden abroad for most of his life, with a mother dying to get him on the throne to get rid of the York king and his beautiful wife and children (Margaret Beaufort, War of the Roses anyone?). To get a rightful Lancaster claim to the throne, he rallies the fallen Lancaster men around him, then kills Richard III and picks up his crown (errr Winter of discontent, the sons of York bla bla bla), then marries Edward IV’s daughter Elizabeth of York to unite the two sides. Boom. Bloodbath, family feuds, a few Shakespeare plays thrown in, and there goes your scandalous story. Imagine the SUN cover for that one: Henry Tudor kills Richard III, crown left to pick up in bloody field. Wow. 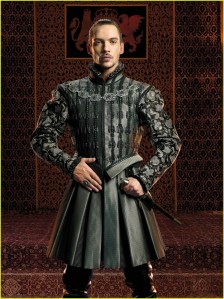 Henry has two sons, Arthur and, guess what, Henry, and betrothes the first-born to Catherine of Aragon, daughter of the coolest royals to live at the time: Ferdinand of Aragon and Isabella of Castile. The princess comes, they marry, then a few months later the poor kid dies of the Sweat. Shit. So then what to do with the princess? Send her back? Keep her and marry her off to someone else? Money and power (ooooh, another scandal right there) meant that Henry VII was holding Catherine almost a prisoner in England, while her parents demanded her back, although they owed Henry half her dowry. In the end, all’s well because Catherine is married to the very young Henry VIII, a marriage possible only because she claims that Arthur was never able to consummate the marriage and so she is still a virgin. Boy, if Arthur had survived they would have made a great episode of Jeremy Kyle! 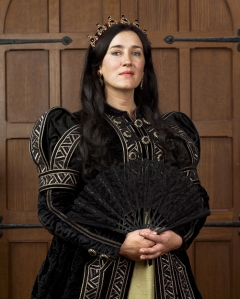 Fast-forward a few years and poor Catherine has not been able to give Henry the son he so desires. Their only child, the frail Mary, cannot be queen in her own right and all her brothers and sisters are either delivered too early or stillborns. Because he’s a man, and a king, Henry has a string of mistresses, amongst which Bessie Blount, who gives him a son he recognises, and Mary Boleyn, whose two children Catherine and Henry are supposedly his, but no one knows. The Boleyn and their kin the Howards are a terribly ambitious lot, and so in hope to ensnare the king, they send first Mary and then Anne in his lap. But while Mary just beds him and gives him children like a poor mare, Anne is skilful enough to bewitch the silly man and make him believe that she will bear him sons if only he gets rid of his wife.

And there starts the whole Bluebeard plot. To divorce Catherine, Henry breaks with Rome and creates the Church of England (good to know this popular strand of protestantism comes from one guy’s desperate need for a divorce) then gets his new wife pregnant and marries her. Boom. That’s the cover of NOW for you, splashed in bright white or black on a sea of pink, with pictures of Catherine of Aragon, without make-up, trying to hide from the camera, while Anne Boleyn is parading with Henry VIII in a low-cut dress and he looks all smug.

Then follows the rest, you know it all (if you don’t, watch The Tudors or read Philippa Gregory’s novels): Anne only gives Henry a girl, Elizabeth, and after a while he gets sick of her so claims she’s a witch and a whore and gets her killed, replacing her with her own lady in waiting, the shy and demure Jane Seymour. Jane gives the king the son he so wanted, but accidentally dies in the process, as women often did back then. 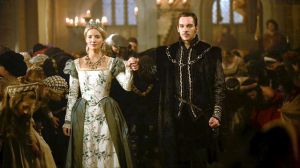 Hoping to make another advantageous marriage with a foreign princess, Henry agrees to marry Anne of Cleves, but poor lass, when he sees her he finds her plain (to be fair, looking at all the portraits from that period, I find them all butt ugly) and so offers her a divorce. 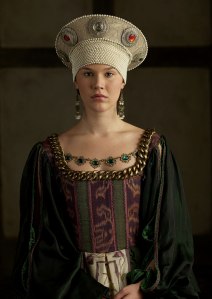 Joss Stone as Anne of Cleves 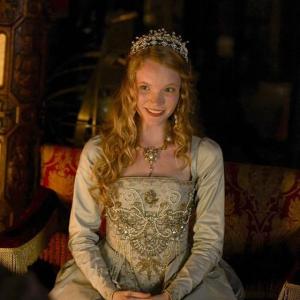 Last but not least, Catherine Parr finds herself (unwillingly?) married to the dying king, and ends up outliving him. The end.

But no! Edward VI, son of Henry and Jane Seymour, ascends the throne a frail teenager. When he dies, he tries to prevent his sister Mary of taking his throne, what with her being a catholic and the daughter of an invalid marriage and all, so he gives it to his cousin Jane Grey. Mary has strong supporters though, and gets poor Jane beheaded (again with that!).

Sarah Bolger as Mary I

Mary is therefore queen, and goes about changing everything back to the way things were before Anne. Her mother’s marriage to Henry is valid, England is once more a catholic country, and poor Elizabeth is kept away from court, imprisoned for most of her youth. Mary marries Philip of Spain (to stay in the family) but the marriage is not a happy one. A king in his own right, Philip is more often than not in Spain, leaving Mary’s bed cold and her womb desperately empty. She spends her days burning protestants at the stake (earning herself the nickname Bloody Mary if you ever wondered about the drink) and praying. This doesn’t help her though, and after a painful five-year reign she dies of cancer and her hated half-sister Elizabeth becomes queen.

Cate Blanchett as Elizabeth I

Elizabeth (ah, finally a good monarch!) is young and just as hardened as her sister, but she seems to have a little more sense. She brought back the Church initiated by her father, but didn’t mind Catholics so much and didn’t burn them or anything. I wonder if it is because of all the trouble that this whole marrying and having babies business was that Elizabeth never married. Known as the Virgin Queen, she refused all matches suggested to her, and ended up leaving her throne to James VI of Scotland, son of her enemy Mary Queen of Scots.

Elizabeth (I beseech you to watch the movies with Cate Blanchett) was a decent ruler. She fought Spain (well you know, her sister’s husband had to get his revenge somehow) and supported king Henry IV of France and she helped Shakespeare get famous and she sent people to America to get some potatoes and gold and wild animals. 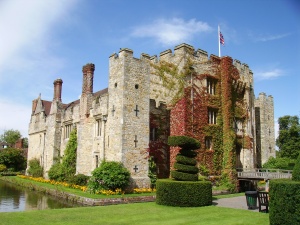 Of course she did much more, but frankly this post is already way too long and I can’t be bothered to read up on her on Wikipedia or to watch the movies again at this time of night (it’s midnight if you’re asking, and I’ll go back to watching The Tudors series 2 in a minute while simultaneously reading The Other Boleyn Girl -well what did you think, this article came out of nowhere???).

So yeah, if you do enjoy a little historical drama, and always liked exploring, I can recommend the TV series and the book (actually all of Philippa Gregory’s books on the Tudors and the War of the Roses) as well as the movie mentioned above. And I’d suggest you go and visit some nice places too this summer. Hever castle is small but gorgeous (that’s the Boleyn castle, you ignorant fools), Hampton Court is nice but a little boring (Cardinal Wolsey’s old place), the Tower of London is great and a lot of fun, and last but not least Windsor castle is a great day out.

Roger, over and out 😛

As I’ve said before, all the original pictures aren’t very pretty, so for the purposes of this article, actors have been chosen to illustrate most of the Tudors 😉