In fact, sadly, no one appreciated it very much. True, the book is so thick and so complex that I was wondering how on Earth they managed to fit everything into one movie when they managed to spread the bloody Hobbit into three, but I had faith. My faith was crushed. 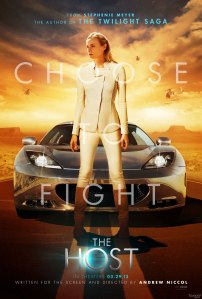 Remember the plot: Earth has been taken over by aliens who take over our bodies and erase us from within. Only a few pockets of human resistance remain, struggling to fight for their right to live. Melanie (Saoirse Ronan) is pursued by Seekers, the “alien” police, and rather than letting herself be caught, she jumps to her death. But alien medicine is potent and in an attempt to find out where the humans live, Wanderer, an alien “soul” is inserted into Melanie’s body.

But instead of finding the body responsive, Wanderer must cohabit with Melanie still inside her, arguing all the time. When both their desires merge, Wanderer goes to find Melanie’s uncle Jeb (William Hurt), her boyfriend Jared (Max Irons) and little brother Jamie (Chandler Canterbury). Held as a prisoner, nearly killed by brothers Kyle (Boyd Holbrook) and Ian (Jake Abel), Wanderer must find a way to prove to everyone that Melanie is still alive and kicking, but also that souls mean no harm.

I guess in an effort to attract the hordes of screaming teenagers, the movie focuses entirely on the love triangle (square?) between Melanie/Jared, Wanderer/Jared and Ian/Melanie-Wanderer. All of the other interesting relationships between people in the caves have been severed completely, rendering this film void of any substance. Wanderer having lived on many planets, her stories were also a priceless addition to the story. But, guess what, they’ve gone. She’s not even a teacher anymore. 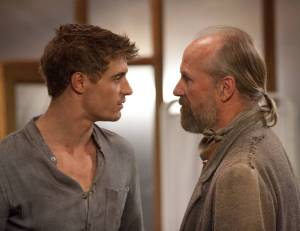 So yeah, if you haven’t read the book, or don’t remember the story too well, go see it. It’s a bit like The Other Boleyn Girl, you shouldn’t be too nitpicky. Plus Max Irons and Jake Abel definitely make for some yummy man action.

I said in my article about The Host (novel) that Stephenie Meyer had already confirmed she’d be turning this into a trilogy. Now to confirm I’ve just googled a bit and found something great by fellow blogger Frank Digiacomo “The movie’s director Andrew Niccol, who expressed interested in helming a sequel even cracked, “Show me the book, Stephenie….You shouldn’t be here. You should be home writing.” The longer Meyer takes to finish the book, the greater the likelihood that the already meager interest in the movie version of The Host — and any sequel it might spawn — will dissipate further, while the first film’s cast members, who’ve expressed an interest in doing a sequel, grow older and commit to other films.”

This is sooo true! So Steph please get on it! And don’t blotch it either. Fans are very hard to please, and The Host is officially your best written book…