Just like the terrorist attack of 9/11, many of us still remember where we were when we heard about the 2004 Indian Ocean Tsunami that destroyed countless lives. 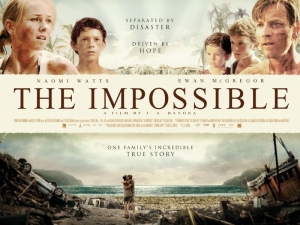 The Impossible is the latest movie by Spanish director Juan Antonio Bayona, based entirely on the true story of a Spanish family, the Belóns. Naomi Watts and Ewan McGregor star as Maria and Henry Bennett who take their three children Lucas, Thomas and Simon to a beach resort in Thailand for Christmas. When the tsunami hits, the entire family is at the resort’s pool, Henry playing with the younger boys in the water, Maria picking up a lost page from her book and Lucas retrieving a ball to play with.

The images that followed stunned everybody into silence as deafening blackness inundated the screen in front of us. Slowly images appeared, showing Maria and Lucas struggling to reach the surface while they are relentlessly hit by debris washed up by the waves. Mother and son manage to reunite, but there is no sign of Henry and the two younger boys. Assuming them to be dead, the two find a place to take shelter. Maria is badly wounded in several places and can only keep up with difficulty. When they are found and moved to the hospital, the story then moves back to Henry who is desperately looking for them in the ruins of the resort.

If you thought Titanic contained a lot of water and misery, think again. The movie was filmed using ‘a mixture of digital effects and real water surges using miniatures that were destroyed by a huge wave created in a water tank in Spain. Bayona later admitted it was “crazy” to commit to working with real water rather than a computer generated wave, but he wanted the story to be authentic. This meant Naomi Watts and Tom Holland, who play mother and son Maria and Lucas, were gulping water in a massive water tank for five weeks.’ (Source: Wikipedia) 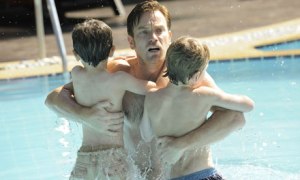 Bring tissues with you as the story of the family, but also that of the people they meet will bring tears of sadness, joy and relief to your eyes. I personally felt for every parent afraid to lose a child, for every child realising that they are all alone, and for every person that survived and wondered why they when no other loved one did. And rarely have I felt so connected to everybody else watching the film with me, hearing other people’s gasps and sniffles.

A film to absolutely see at the cinema before it disappears.