I love Christmas markets and England doesn’t really have authentic ones. So I made Dan go to Cologne which is famous for its seven Christmas markets. We went on the first weekend of December and were very lucky with the weather as it was very sunny.

Cologne is one of my favourite cities, it’s just beautiful and somehow manages to be effortlessly cool somehow. I mean you think Paris had a big “Love lock” bridge? Think again. Cologne has a whole train bridge full of them! 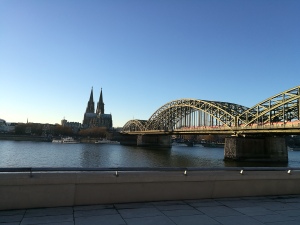 Anyway we stayed at a Holiday Inn a little further out and quickly realised that the main issue with the transit system is that the machines inside the S-Bahn or inside U-Bahn stations do not take Visa cards or bills, so coins are your only option if you don’t want to have to go into the ticket office. We ended up saving every coin (except for the 50 cents which you should keep for toilets) just so we could buy the daily travelcards.

We were worried at first we might not be able to see al the Christmas markets, but it turns out, once you’ve walked through one, you’ve kind of seen them all. Most stalls will repeat several times in just one market, so across several, you can skip quite a few.

Dan discovered Flammkueche for the first time, and if you don’t know what that is, find some and try it right now. Originally from Alsace (now a region of France, used to be a region of Germany, went back and forth for a while -you get the picture) it is a thin dough covered with cream, onions and bacon. It’s very simple, yet absolutely delicious.

I also made him try Kartoffelpuffer (potato pancakes) and we obviously had Bratwurst. And if you want to keep a memento of your time at a Christmas market, the best way is to buy a hot beverage and keep the mug. Germans are nice, so they’ll serve your drink in awesome mugs, usually designed especially for the market, and if you’re lucky and a regular they change every year. You pay for your drink and they add 2€ for the mug. If you give the mug back once you’re done, you get your money back. If you don’t, you just got a mug for very little money. I have 3 from the market in Wiesbaden, and we got 3 from the markets in Cologne. 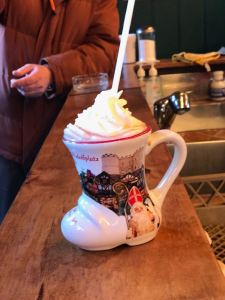 The markets are mainly traditional, with the exception the the tiny gay market (the penis waffles on sticks spring to mind, as does the penis memory game). My favourite was the one by the harbour, and the one dedicated to St Nicolas.

We managed to easily walk from one to the other, also using the S-Bahn occasionally for the one that was furthest away from us. It’s not too hard if you don’t mind having sore feet at night.

We ate at a Brauhaus not too far from the hotel, and the next day continued our discovery. Right next to the market by the harbour, there lies the Lindt museum. Now, you know the title of this blog, so obviously I was going to visit a chocolate museum! We got to taste some Lindt, and they even talk about other chocolates (like Milka and Ferrero/Kinder) and for those who really want to, you can design your own chocolate (like the Ritter Sport shop in Berlin).

I really like Cologne, I think it’s a beautiful city with the Dom and the river, the old part looks very traditional and it has lots of shopping opportunities and they have a big arena so musicals and concerts are easy to get to, you can also get to other German cities because the station links to a lot of places. I would definitely recommend visiting (in winter or summer), however if you can, avoid flying via Düsseldorf if you don’t like heights! They have a cable car between terminals which sways so much I almost got sick in the 10min it took us to ride it.

But, on the flight back I got to see Ronan Keating! We happened to be in first class because we used miles, and this guy comes on last and I look at him and think nothing of it, then he takes his sweater off and I recognise his tattoos, check online to make sure, but yes! It was him! Dan also saw David Hasselhoff (who was coming back from a Comic Con), but I missed him. 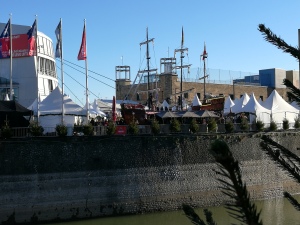 Photos by: author’s own