For the first time, I managed to get tickets to the BFI London Film Festival. I wanted to see many of the movies, but in the end, we picked two,one based on each of our interests. Their Finest was my choice because of the impressive cast.

The movie, based on the novel Their Finest Hour And A Half by Lissa Evans, tells the story of Catrin Cole (Gemma Arterton), a Welsh woman recently come to London who applies for a job at the Ministry of Information and finds herself roped into being a scriptwriter instead of a secretary as assumed. She’s introduced to Tom Buckley (Sam Claflin) and his partner who are writing the script for a new propaganda movie to cheer up the country. Catrin is supposed to write women’s speech, as the guys don’t think this is important work.

Soon enough, their initial idea is shot down and they need to find a new story. Luckily, a short newspaper article about twin sisters stealing a boat in order to save men from the beaches of Dunkirk proves a good enough incident to charm the Ministry and please the masses. Catrin is sent to talk to them, yet quickly finds out that the story is a lie: while the sisters did steal a boat from their drunk dad in ordet to get to Dunkirk, they never made it out of British waters because of an engine failure, and another boat just gave them soldiers on their way back.

Back in London, Catrin’s husband Ellis (Jack Huston) is having trouble selling his art. The Ministry finds it too gloomy and he can’t afford the rent. Downhearted, he wants Catrin to return to Wales to be safe from the Blitz, but she decides to pitch the sisters’ story anyway and ask for a higher salary. She convinces the panel and soon finds herself sucked into the movie making process. 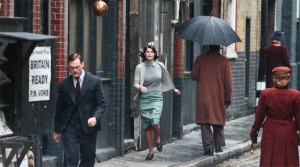 The movie is a lovely throwback to the glory of the late 30s and early 40s, of war-time Britain keeping calm and going to the cinema while bombs are dropped over London every day. Everything breathes realism, from the clothes and accents down to the dialogues filled with polite sexism and pretend enthusiasm.

Arterton is beautifully restrained, calm and charming. Yes, she’s a woman trying to break through in an industry that’s essentially male, but you won’t see her make big speeches or throwing tantrums. On the contrary, she’s cool and collected, proving herself essential in order to show what she’s worth. A strong woman who knows her worth.

Sam Claflin is annoyingly cute with Harry Potter glasses and tweed suits, chainsmoking his way through every scene, slowly befriending Catrin while they learn to live and write alongside each other. Bill Nighy, playing the former star of the big screen, now forced to return as an older character, is given free reign and manages to make you laugh and weep. Welcome appearances by favourites like Jeremy Irons and Richard E. Grant lend a nice touch.

A must-see as soon as it hits your local cinema!