Ever since Despicable Me hit the cinemas back in 2010, Minions have been everywhere. And whether you find them annoying or endearing, you won’t get rid of them so easily. After countless mini films, Despicable Me 2 and now the Minions movie, a third Despicable instalment is already on the works.

Geoffrey Rush narrates parts of the movie, and we’re immediately taught a lesson in evolution. Minions, even in their most basic form, have always been in search of a “big bad” to call their leader. Desperate for the most evil, they follow one creature after the other, eventually evolving to the shape and size we know today. From a T-Rex to the Egyptians, Dracula and Napoleon, the Minions have always been looking for the one, their big boss. Except that finding one isn’t hard, it’s keeping them.

After messing up yet again, the Minions find themselves sent into the depth of a frozen cave. There, they build a sprawling city for themselves. But after hundreds of years alone, they find themselves at a loss. Lacking in motivation, slowly losing the will to do anything, one of their own suddenly decides to seek out their next employer. Kevin wants to launch an expedition and is seeking for followers. While enthused by his plans, only Bob and Stuart agree to come with him. 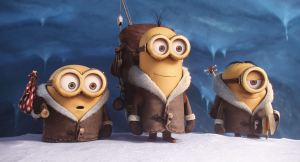 Journeying from their cave to the sprawling streets of 1970s New York City. Once there, they hear about a super villain gathering set to take place in Orlando. Finding a family willing to take them there, they somehow manage to outsmart the greatest villain of them all, Scarlett Overkill (Sandra Bullock). Will they be able to keep her this time? Can they bring their friends to work with Scarlett as well?

Director of all things Despicable and Minion, Pierre Coffin speaks them all himself. The language, officially called Minionese, is a lot of gibberish, with random words taken from French, Italian and Spanish thrown in. I spent most of the film giggling at the random combinations, and while some of them make a lot of sense “para ti” (for you) or “da nada” (no worries), most of the times it’s literally just food descriptions: Profiteroles, Couscous Merguez, Tika Masala.

“Their language sounds silly, but when you believe that they’re actually communicating that’s what makes it funnier. What’s great about the Minion language, while it is gibberish, it sounds real because Pierre puts in words from many languages and does the lion’s share of the Minion recordings. There are a lot of food references. For example, ‘poulet tika masala’ is French for the Indian chicken dish.” (read more here) 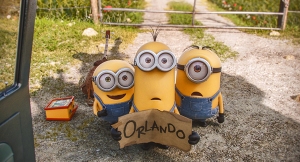 The movie was much better than I expected, with plenty of humour and loads of references thrown in. I enjoyed every minute of it and definitely recommend it to fans of animated stories.