If you’re the kind of person who notices things around them, you might have seen Oh’s face following you around wherever you go for the past few weeks. Personally, he’s been on many buses driving past me, and I see him almost every morning when stopping at Pimlico station: the carriage I ride in has a view of the opposite platform, where a massive Home poster with Oh and Pig is hanging. It makes me smile.

You might wonder whether I’m just speaking gibberish to you. I am not. Home is the latest Dreamworks movie, made by the same guys who did The Croods, and it presents you with an adorable and likeable character, Oh.

Oh (Tim Parsons) is an alien from the race of the Boov. The Boov seem “normal” enough, except that they keep relocating to new planets, constantly running away from their enemy, the Gorg. The Boov’s leader, Captain Smek (Steve Martin) is constantly urging them to run away. Less captain, more rat behaviour if you ask me 😉 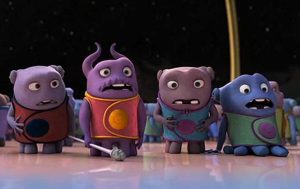 Anyhoo, Oh has never really fit in within the Boov. They all follow rules and guidelines, but don’t seem to interact with each other much beyond necessity (one wonders how they reproduce?). Constantly attempting to make friends, he makes one blunder after the other. As they eventually take over Earth, relocating all the humans to massive towns in Australia, Oh makes the biggest mistake of all: in a bid to invite everyone to his house-warming party, he sends his Evite out into space, heading straight for the Gorg.

Rejected and hunted by his peers, Oh goes into hiding and bumps into young Tip (Rihanna), the last human left outside of the settlement. Driving with her cat Pig, Tip is trying to find her mother Lucy (Jennifer Lopez). At first wary of each other, Tip and Oh form an alliance in order to find Lucy and hide Oh. He pimps her car, making it fly (using Slushies, now that’s eco-driving) and they set off for Paris, where the Boov Command Centre is.

I convinced my Mum to go see it with me while she’s visiting, and was hoping very much that the film would be worth it (she liked The Croods and Frozen, but she’s a tough crowd). I’m happy to say that it was definitely worth it. Tim Parsons’ Oh is so dorky and cute that you just want to squish him. The character is well done, and the Boov as a rule look like funky squid, with tentacle-like legs and square heads with huge Manga eyes.

Tip and Lucy illustrate a beautiful case of mother-daughter love, and Tip as voiced by Rihanna is a great kid, able to stand on her own two feet and fight her corner, even though she’s dying to get back to her mother. She enjoys teaching Oh the ways of the humans, starting with dancing and going against your fear.

It’s a great movie for all kinds of reasons, though I wouldn’t take small children to see it. It’s got more messages than you think and a five year old will get bored and wait expectantly for cheap slapstick humour in between all the dialogue. I’d say 8 or 9 year olds minimum. The movie is all about tolerance and acceptance, about people’s differences and how we need to stick together and fight to be better people.

Definitely go see it, and enjoy leaving with Oh’s soon-to-be iconic catchphrases. What is the meaning of your face?