I have friends who still read a lot of “teenage” fiction. Sometimes, so do I. I do own the John Green book, I just haven’t read it yet. Nevertheless, I went to see the movie yesterday and (obviously) cried my eyes out.

For those of you who’ve been living under a rock for the past few months, John Green is an author specialised in making you feel all the right and wrong things at the same time, sensation only made worse by the fact that the stories involve youngsters, so, you know. 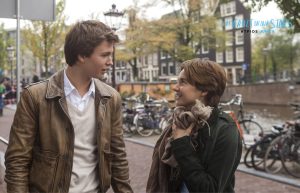 The Fault in our Stars is an amazing story following Hazel Grace Lancaster (Shailene Woodley), a teenager living with the permanent threat of cancer looming over her. Dragging her oxygen tank wherever she goes, Hazel is a realistic and witty girl whose parents try to inflate with optimism and joie de vivre every day. Forced to go to Cancer Support Group in order to avoid depression, Hazel meets Augustus Waters (Ansel Elgort), a cancer survivor with a prosthetic leg. Gus seems fascinated by Hazel and quickly manages to become her friend. 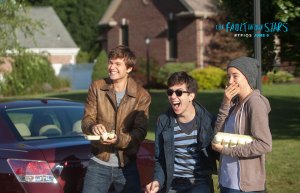 Sharing their love for Hazel’s favourite book and author (Willem Dafoe), united in helping their friend Isaac (Nat Wolff) and slowly creating a bubble of perfect happiness around them, Hazel and Gus live the kind of romance most people can only aspire to.

I won’t divulge any more, but y’all aren’t dumb and it’s cancer, so really, nothing and no one is safe… Just expect to cry for about thirty minutes. Maybe more. 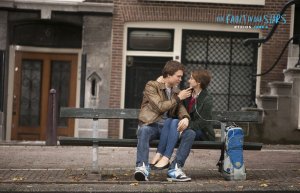 To those who wonder whether there is any chemistry between Woodley and Elgort (considering they just played brother and sister in Divergent) rest assured: there’s plenty. The way these two look at each other, they’re probably responsible for the icecap melting. Woodley is amazing as Hazel, having cut her very long hair for the part, and losing all the muscle she had gained for Divergent, melting into the frail body of Hazel like it’s second nature. Elgort is every mother’s dream when it comes to guys their daughters should date, and his adorable expression carries half the meaning of everything he says. 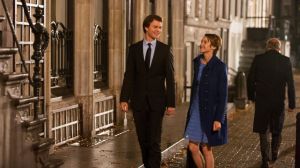 Big mention to Hazel’s parents Frannie (Laura Dern from Jurassic Park) and Michael (Sam Trammel from true Blood) who considering the circumstances play only a small part in the movie, but who do it so well. Their faith that everything will turn out well, and their efforts to make their daughter’s life as good as it deserves to be should be applauded.

If you enjoyed My Sister’s Keeper, you’ll definitely love this. And it stays true to the story for once. Go see it, but don”t forget a pack of tissues. 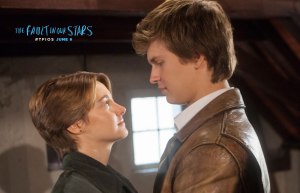 3 thoughts on “The Fault In Our Stars (movie)”