When I was a kid, I would have given anything to go to Disneyland. Neither one of my parents is really keen on it though, so it never happened. When I turned 21, I decided to treat myself and go with a group of friends. IT WAS AWESOME. So then I went again in 2012, and more recently, this week!! 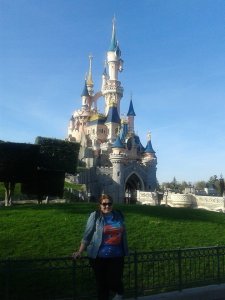 This was the first time I actually had nice weather (note to everyone: don’t go in January, nor in September/October. You will freeze and/or get veeeery wet.) and it meant being able to enjoy walking round the park, taking nice pictures and not being afraid or worried about waiting in a queue or being on an outdoor ride. 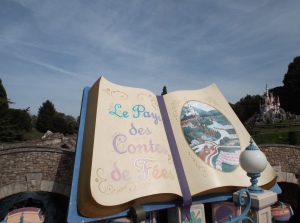 Also, try to plan your trip outside of the school holiday season and weekends. I’m lucky at the moment as I get Wednesdays and Thursdays off, and my friend isn’t working so we could book mid-week. I’d still advise anyone to just take a day or two off instead of waiting for the weekend. We never had a queue last longer than 20min, you could get a seat in a restaurant, and the hotel was dead empty.

We stayed at the Explorer’s Hotel because my friend found a deal there. It’s decent, and has a pool and a 5D cinema. We were a bit disappointed though. The breakfast buffet was pretty sparse, and the rooms weren’t all that comfortable: thin mattresses, terrible TV (very small screen, fuzzy image, very few channels), the bathroom not looking very clean… On the other hand, I’d definitely recommend the hotel we stayed at in 2012, that was the Kyriad. Lovely beds, clean, TV worked fine, breakfast and dinner buffets were huge and we ate so much we almost burst.

We had 2 days/2 parks tickets, so we could jump from one to the other. It’s the best choice because Disney studios doesn’t actually have that many rides, and once you’ve done all the animation/production things they have to offer (Cinémagique, Disney Animation, Armageddon etc.) there’s little need to do them again. Unfortunately for us, Crush’s Coaster (the Nemo-inspired ride) was closed, so we couldn’t do that at all.

I’m not a massive fans of loops (thank you motion sickness) but since it’s all in the dark, I caved and did Space Mountain 2. It wasn’t as bad as I thought, but I didn’t like that fact your head gets thrown from side to side. The seats should ideally have something to hold your neck in place, kinda like those travel cushions you can buy at airports. I had a slight headache for most of the day and didn’t do the Aerosmith ride because of it.

On the other hand, I LOVE Big Thunder Mountain, and we did that one 8 times in total! I also enjoyed AC Racer (Toy Story ride – the feeling you get is awesome) and Star Tours (Star Wars ride). If Crush’s Coaster had been open, we probably would’ve done that a few times, as it’s really great, albeit a tad too short. I can also recommend The Fairytale World boat ride, which is really pretty, and Pirates of the Caribbean which is cool too.

Now, about the shows and parades: I’ve seen three parades so far and this one was alright. They kept playing the same song on repeat which is terribly annoying, and it seemed really short… I remember the first one I saw being a lot longer. The show at closing time however, was EPIC. It’s called Disney Dreams and they use the castle as a canvas to project movie extracts, characters that interact with each other… Then there’s fireworks, water fountains, fire… It’s just great.

We also spent a lot of time in the Disney village as food is cheaper there and they have different stores. I can deffo recommend the Kindg Ludwig’s Castle restaurant (especially for dinner after a long day, the menu has a decent price and good portions) and the Sandwich place at the very back. They have a big Lego shop as well as a massive Disneystore, but more importantly they have a shop with Disney clothes which aren’t available inside the park.

All in all, a great visit. And yes, I’ll go again. Because you’re never too old to go to Disneyland. Because it doesn’t matter how many times you’ve done a ride, or taken pictures of THAT castle. It’s just… magic. 😉

One thought on “Disneyland Paris: 3rd Time’s A Charm”