Recently, I had a collection of firsts: my first flight, my first venture out of Europe (Sharm El Sheikh)  and my first girls’ holiday.

To some, this might sound rather trivial, especially if you’ve been flying since infancy, if you celebrated your tenth birthday at Disneyworld or if girls’ holidays is all you have. To me, all of these were major steps because they were made towards the unknown.

Yes, I’m 24 and I’d never been on a plane. Hard to believe, yes, but not impossible. Firstly, because we never left Europe and within the continent you can get anywhere by car/train and ferry, and secondly because my parents aren’t too keen on flying themselves so they never suggested it as a means of transport. Especially because if you’re only going 1000km or so, the time wasted at the airport might as well have been spent on a train or in a car.

Well now that it’s been done I can tell you that yes, flying is freaky. But it’s also cool. I don’t fancy landing too much, because my ears are sensitive and I get massive headaches, but take-off is pretty neat. Feels like a rollercoaster. We flew Easyjet which is of course the cheapest for most destinations, and to be fair I have nothing to say against them. Flights left early, now that you can book your seats it’s not such a hassle, and the staff was friendly. Sitting is also ok, except that the space might be too tight for people with long legs, and I personally found the seatbelt to be rather tight. But that’s just me. Oh and you absolutely cannot sleep in those seats. We tried several positions, and none worked. So just forget it. 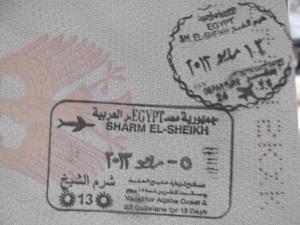 Now about leaving Europe for the first time… Well I was really excited about getting my first stamp in my passport! It’s childish I know, but such a fun thing to have. Even if the guard glares at you like you might want to kill someone. No sir, I’m only here to soak up the sun because back in the UK it’s just permanently grey. We booked the whole thing online, flights, 5 star resort all inclusive with transfers, and everything went quite neatly. Someone had a sign with our name on it at the airport, they took us through passport security, then to get the suitcases and finally to a bus which drove us to the hotel. Once there we had an official rep responsible for organising and booking any tours or activities we wanted to do. 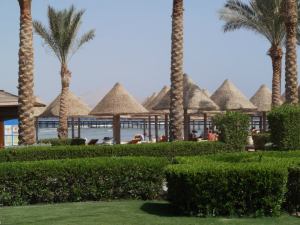 The hotel was really awesome (Grand Sharm Plaza if you ever want to go), lovely rooms (except for the non-working fridge), amazing pools, really nice staff (especially the animation team) and the all-inclusive worked quite well for us. We had two double beds for three people and an actual bathtub, which is a nice change from cheap hotels.

We were there for a week and spent a lot of time lounging around the pool, topping up our vitamin D levels. We also went to Soho Square Sharm El Sheikh, this long street with some shops, clubs and bars. We also went on a boat to Tiran island and I snorkelled (also a first ! Pretty fish!!) and the girls Scuba Dived. They also went horse riding and I went to a waterpark, but that was less cool. I prefer Aqualand. 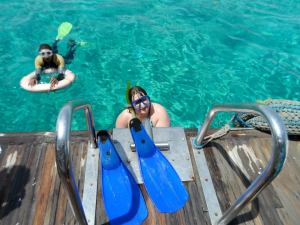 And the girls… Well it was great fun not having any parents about, deciding what we wanted to do and also being three you can just go away if you want to be alone, or stay with the other person. Plus at the pool you don’t talk too much, you read or do Sudokus or revise. 🙂

Would I fly again? Yes. I like watching the world from above, and I can clutch a hand or a stuffed toy when landing. Would I go to Egypt again? Yes, but maybe to Luxor or Cairo to actually see something. Would I go away with friends again? HELL YES.

2 thoughts on “Charming the Sheikh”