Back in he 90s, the Internet was making its first appearance into the home and the lives of people, and Starbucks was starting to turn into the giant it is today. Both feature in Nora Ephron’s hit romantic comedy You’ve Got Mail.

Set in New York, the story follows book shop owner Kathleen Kelly (Meg Ryan) and superstore co-owner Joe Fox (Tom Hanks) as they meet and hate each other in real life, while secretly being attracted to each other anonymously on he internet. When Joe realises who his online crush really is, he devises a series of ‘coincidences’ to make Kathleen fall in love with him in real life too. 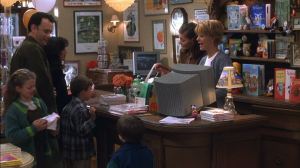 The movie might not seem like a big blockbuster, nor was it as talked about as Sleepless in Seattle for example, although using the same actors than the smash hit from the 80s worked a charm as these two didn’t get enough screen-time together last time. 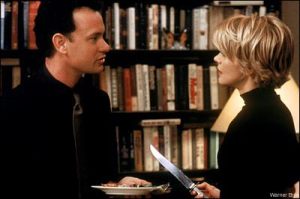 Nora Ephron used the movie not only as a depiction of modern tools to find love as well as a love story of New York itself. Both characters talk about their city with passion and many landmarks are shown and used almost deferentially. In the bonus section of my DVD, you can see a map of New York and little clips showing which parts they used.

Ephron actually had a theory that Starbucks had become the new third place. Everybody needs one, a place that isn’t home or the office, and back when she made the movie Starbucks was slowly becoming that third place. At the same time, the internet and chat rooms like the one where Joe and Kathleen meet were also becoming a third place that you could access remotely.

If you care about things like that, please note the movie also has a really great soundtrack. Special mention to ‘Dreams’ by The Cranberries, ‘Rockin’ Robin’ by Bobby Day and ‘Dummy Song’ by Louis Armstrong. Whenever the CD pops up in my media player or on my MP3, the whole movie rolls through my brain, which shows that I have a very audiovisual memory.

So if you haven’t seen it yet, get it!!! Worth every penny you spend.

3 thoughts on “You’ve Got Mail”